One of my favourite parts of the day is my morning walk to school with my son Harrison. Being stuck in an office all day isn’t the best way for a primate to live, so a refreshing start to the day is always welcome. Plus I get the added benefit of being able to spend some time with my son; it’s a win-win.

Usually we talk about whatever is going on at the time, or whatever Harrison is fixated on at the moment, so there have been many walks dominated by Harry Potter theorising, Superhero discussions, Dragon tales and so forth. But we also talk about other topics in the world in general.

Today’s walk involved an update on the progress of SpaceX’s goal of colonising space (and eventually Mars), spoiler alert: they suffered a little setback.

But the main reason for this post is because Harry wanted me to look up Geladas when I got to work. Geladas for those not in the know, are a distant relative of baboons, and not an Italian style of ice cream, as I originally thought. He has been watching a bunch of Deadly 60 episodes, and clearly this animal appeared on one because he had manifold facts to tell me this morning. He told me where they live, what terrain they like, their diet, what hunts them, etcetera. But what he really wanted to tell me was about their teeth. Specifically about their canine, teeth, about how they are the largest of any primate, and how they like to show them off by flipping up their upper lip.

Let me tell you, I thought I knew what to expect, but I didnt expect it to look this terrifying: 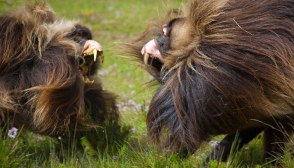 This looks like something a Predator would struggle to add to its trophy wall!

At any rate, I just thought this was cool, and figured I would share it with you all (whoever that may be). To finish up though, let me leave you with a more comforting image of our not so distant primate relatives; these little dudes enjoying a nice relaxing hot spring: