Well I did it (kind of). I made it through February without purchasing any new books!

What’s that you say? What is that handsome hardcover book currently gracing the mantle in my lounge room…

Yes fine, I admit it; I bought David Attenborough’s book when my son and I saw him live last month. But as this was a once-in-a-lifetime event, I figured I could count it as memorabilia, rather than an actual book purchase.

But apart from that one technicality, I didn’t purchase a single book last month; hoorah!

So, in keeping with my tradition of giving extremely late catch ups for the previous months reads, I present all of February’s reads.

I first discovered Barry Eisler books on my honeymoon. I grabbed a copy of One Last Kill, the fourth book in his John Rain series, from the airport as a quick read for the plane ride. I was hooked.

A holiday in Sydney was just the right setting to read this book. An unfamiliar location, staying at swish hotels; it was the exact environments mentioned in the book!

Eisler’s writing is so detailed, his understanding of the craft so complete. His books have given me a much greater appreciation for spy craft, and whats more it has made it extra difficult to suspend disbelief when I watch anything involving espionage or counter-survelliance.

“That character should run a surveillance detection route” “There is no way they wouldn’t have seen that tail” “What a sloppy choke point”. These are the kinds of things that enter my mind during movies all the time now.But that all being said, I am much happier for this education; ignorance is not bliss, the truth is always a better state of being.

So when Amazon, with their relentlessly fine-tuned recommendation algorithm, sent me an email about the release of this book, I couldn’t resist.

This is my first non-John Rain Eisler read, and I was not disappointed. All the same attention to detail was still there, but with new exciting characters along for the ride.

The story follows Detective Livia Lone as it concurrently tells her story of being sold into child slavery by her parents, and of her current life trying to track down her sister, and prevent others from suffering her same fate.

Livia is a compelling character. Her origin story is fascinating, and borders on superhero, were it not for the cold-blooded nature of her vigilante actions. Less Batman, more Punisher. But given her targets of her vendetta (child slavery and rape) you are rarely sympathetic to those she dispatches.

Eisler signature combat writing is also on display here, with Livia being an expert in wrestling and brazilian jujitsu. And as dry and technical as detailed explanations of chokeholds may appear, it really gives me not only a greater appreciation for the art itself but also an extra dimension when viewing my sons own black-belt level martial arts.

Hopefully in the future this book will move from the ‘stand alone’ section on Barry’s website, and we can get some more adventures centred around Livia Lone. 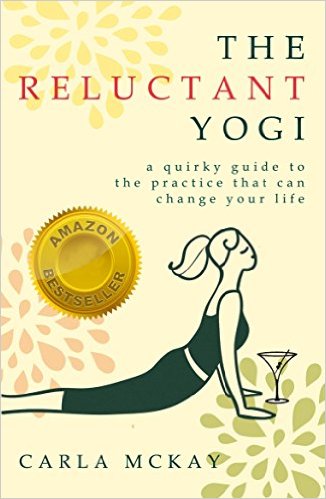 For a while now I have been interested in the idea of yoga, but I could never get over all the……wank.

I understand that there is a lot of scientific evidence for the benefits that yoga offers, and that intuitively the stretches and meditative qualities it possesses would be good for the body and mind. But when people start talking about chakras, or energy, I quickly lose faith in their objective nature.

So I was really looking for a more objective analysis of yoga; what is it, how does it work, and is it the thing for me?

This book was exactly what I was looking for. A guide to yoga written by a journalist who approached it from an equally skeptical standpoint. And while at some points it might sound like she has drunk from the yogi Kool-Aid, she is always quick to explain her experiences in a rational manner, and to point out that these experiences are not always a commonly shared affair.

All this being said, i have yet to salute the sun, or imitated a dog, no matter the direction it faced. Bt it has given me a far greater understanding of yoga and how it might eventually find a place in my life. It is reassuring to know that there is much secular basis for undertaking the practice, and that so many of its benefits can be divorced from the mumbo-jumbo that is often touted as being an intrinsic part of yoga.

One day I shall get out my yoga mat and start reaping these benefits, but until then I will have to make do with the occasional stretch.

I Contain Multitudes: The Microbes Within Us and a Grander View of Life 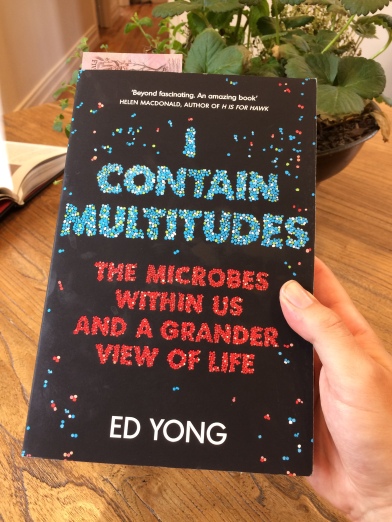 This book really delivered on the second part of its title; it really opened up this whole other dimension of life.

When I told people I was reading a book about microbes they usually commented on whether it was making me become a germophobe, or was I now revolted by all the things I was learning were squirming around in the microsphere. But really the opposite is true. Instead of being disgusted I was fascinated. Instead I found myself embracing this new, grander view of life.

Perhaps this isnt the best thing after all. I now feel less worried about the bacteria flowing through the world around me. hopefully this doesnt lead to a loss in hygiene practices…

Anyhow, this book is fast looking like a favourite of 2017. Much like last years The Genius of Birds altered my perspective and allowed me to look at our feathered friends through a new lens, now I am constantly reevaluating the world around me as representing only a small fraction of what life has to offer.

The book is full of interesting tales that really turn around a lot of the things you thought you knew. Like how hospitals are realising the benefits of leaving windows open occasionally, to help keep the microbiome of the building more on balance. The theory being; that if you clean too much, you effectively wipe the microbial garden clean, which allows some of the bad microbes to take root like weed in an empty lot. Keeping many of the neutral bacteria and other mini-life in the environment actually halts the growth of some of the nasty ones, thus keeping eveything safer.

I cant recommend this book enough for anyone who wants to start really understanding the complexity of the world we live in, and the wonders that this extended view of life offers us.

My second Barry Eisler book of the year, of the month even! After enjoying delving back into the authors writing at the turn of the month, I was pleased to find this book awaiting me on my kindle.

February’s goal of not buying any new books definitely worked in my favour here, because I wasn’t even aware of having purchased this book, and so it could have gone for years without finding its way onto my read list. But after finishing I Contain Multitudes one night and struggling to find the energy to reach my bookshelf (beer may have played a part), I instead delved into the depths of my Kindle, and found this beauty.

A prequel to the John Rain series, this book finds our anti-hero in the streets of Tokyo just as he finds himself unwittingly entering the workforce as a professional hitman. He isn’t as polished as the John Rain we have come to know and love, but his central character traits are definitely on show. Whats more, we get to watch on as the signature elements behind the character begin to form. His fastidious nature, his ‘rules’, his love of jazz. All of that starts here, and starts convincingly.

My only criticism with regard to unplanned prequels, is that you begin to wonder why none of these events were really mentioned in the subsequent tales of the character. So much of what happens here is formative, and yet other story elements are never mentioned in the following books. And given we are told these stories in first person and are privy to the stream of consciousness of Rain throughout them. The fact that the girlfriend he has in this book for instance, is ever mentioned again, is questionable.

But hey; i get the practicality of this, and while it was something that entered my mind, it didn’t stop me loving every chapter of this book.

Barry Eisler is a very reliable writer, and if you have liked anything he has written before, then you are in for a good time here.

This was my last book of the month. As you an see by the above quote; it is a bit of a weird one. As I mentioned with some of last years books, I like a good hook. That initial weird sentence that gets you intrigued. So when Amazon sent me this book with the premise of hairy beach-ball shaped aliens invading earth, and hacking into government systems, I couldn’t turn it away.

The book started off quite intriguing. The aliens were bizarre, different from the usual sci-fi invaders. Their motivation was mysterious, and their means were quite frankly, amusing. The main character was compelling, and funny, so I was engaged enough to continue on, despite the story offering no real direction at first.

But in the end it turned a bit preachy. Rather than giving me the point of view of some aliens intelligence, instead it felt like I was being told how to solve all of earth problems by some idealistic liberal (and don’t get me wrong I am a big fan of leftist style politics). In the end it all seemed too human, too much like a straw man argument brought to life.

So while I was slightly losing interest in the story, I was determined to finish it off, due to my belief in some kind of last minute twist that would provide the adequate pay off.

And then, I was confronted with this:

Well I am feeling good about my February readings. I learned new things, enjoyed some reality escapage, and broadened my understanding of the world. Whats more, I didn’t spend a cent on new books.

But March, oh March; you are looking good!

First of all, a new Kim Stanley Robinson book! My favourite author by far. So much of who I am is down to reading this mans books in my formative years. And with this instalment set in a  future still dealing with the effects of man made climate change, I am really looking forward to seeing what it has to say.

Then, the beginning of the new John Scalzi space opera arrives with the novel The Collapsing Empire. I have read the first three chapters over here and it was pretty damn good.

And lastly, Luna: Wolf Moon. I had never heard of this author before, but last years Luna: New Moon blew me out of the water, so I am really looking forward to this instalment, especially if it involves (as the title hopefully suggests) of the wolf pack mentioned in the original book.

Here is to March (which is already over a third over, but none of these books have arrived yet!).